The Gods of Heavenly Punishment

In this evocative and thrilling epic novel, fifteen-year-old Yoshi Kobayashi, child of Japan s New Empire, daughter of an ardent expansionist and a mother with a haunting past, is on her way home on a March night when American bombers shower her city with napalm an attack that leaves one hundred thousand dead within hours and half the city in ashen ruins. In the days that follow, Yoshi's old life will blur beyond recognition, leading her to a new world marked by destruction and shaped by those considered the enemy: Cam, a downed bomber pilot taken prisoner by the Imperial Japanese Army; Anton, a gifted architect who helped modernize Tokyo s prewar skyline but is now charged with destroying it; and Billy, an Occupation soldier who arrives in the blackened city with a dark secret of his own. Directly or indirectly, each will shape Yoshi's journey as she seeks safety, love, and redemption

Jennifer Cody Epstein s triumphant second novel is a big, visceral, achingly humane portrait of wartime Japan and several Americans charged with building and destroying it. The sweep of Epstein s vision is matched by her empathetic attention to the smallest details in the lives of the people who inhabit it.

With the drama and sweep of The English Patient and a rich, painterly sensibility all her own, Jennifer Cody Epstein has created an indelible portrait of the war in the Pacific, seen through the eyes of six characters whose stories will haunt you long after the final brush stroke

The Gods of Heavenly Punishment is a page-turner thanks to its high-stakes adventure, torrid love affairs and characters so real they seem to follow you around. And in the end, this gripping novel asks us not just to consider a lost chapter of a famous war but also to explore what it means to be lucky--and what it means to be loved. 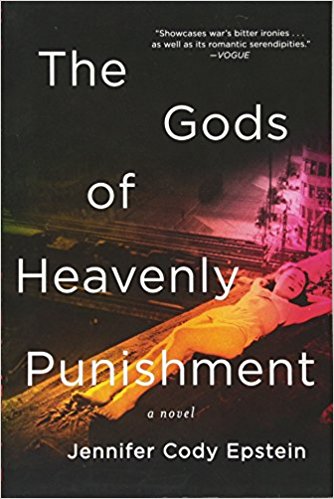