The award winning comedy returns for a final three episodes in the countdown to the Olympic Games.

As ever, the team, lead by Ian Fletcher (Hugh Bonneville) are struggling to cope with the logistics of putting on the greatest show on Earth. Now the pressure is really starting to show, with only 32 days to go until the opening ceremony. How will they manage when it is discovered that starting pistols are being converted to shoot live rounds, the Americans turn up to review security procedures and their planned 'inclusivity' day is being launched on the same day as Seb Coe's 'diversity' day?

Media
Reviews
Twenty Twelve has grown to be world-class Olympian bollocks, and I suspect that, when it’s all over, we may miss it more than the hopping and skipping. AA Gill
The Sunday Times Full Review
Another half hour of unalloyed happiness David Chater
The Times Full Review
Smart, superbly played and painfully close-to-the-bone. Michael Hogan
The Telegraph Full Review
brilliantly skewers both group-think idiocy and the personal rivalries inherent to all organisations Jonathan Wright
The Guardian
The only bad thing about the start of the real Olympic Games is that it necessarily marks the end of this inspired comedy David Chater
The Times Full Review
It’s been funny because it’s true. Just a shame it has to end. Perhaps we should win the rights to host another global event we can’t afford, just so this sublime series can be revived? Michael Hogan
The Telegraph

Jane Simons
The Mirror
an exponentially multiplying delight and a triumph of English self-deprecation Phil Harrison
Time Out Full Review
It's almost too realistic to be funny Ben Arnold
The Guardian
inspired satire David Chater
The Times Full Review
A joy Alison Graham
Radio Times Full Review
as you’re chuckling, there’s also a creeping sense that somewhere this is all actually happening Critics Choice
The Telegraph Full Review
John Morton keeps things just the right side of believable. And he captures petty bureaucracy and management jargon beautifully Nigel Farndale
The Telegraph
pitch-perfect sitcom Phil Harrison
Time Out Full Review
I love Twenty Twelve as a portrait of a nation at ease with its unrivalled inability to be any good at anything ever Stuart Jeffries
The Guardian
good for the soul Ben Machell
The Times Full Review

pitch-perfect Bafta-nominated mockumentary... As with all the finest satire, this series, creates a preposterous fiction that is horribly believable

Benjamin Secher
The Telegraph Full Review
The mockumentary-style sitcom owes its success to clever, well-observed scripts by John Morton that blend the utterly insane with the entirely believable Alison Kervin
Radio Times
With the end of the Games only a month away now, one of the things I’m already preparing to miss is Twenty Twelve Caroline Frost
Huffington Post 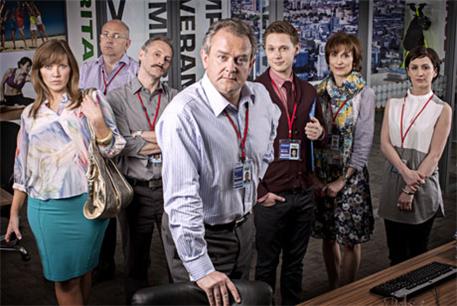