View PDF
theatre
Role Polyxena
Director Jonathan Kent
Donmar Warehouse
Hecuba is Frank McGuiness’ 2004 adaptation of Euripides’ tragedy about the former queen of Troy. It is set in the aftermath of the Trojan War and follows the title character as she seeks revenge on those responsible for the death of her son Polydorus. 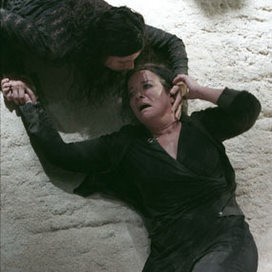