View PDF
Nominated for an Olivier Award, 2012 - Best Actress in a Musical
theatre
Role Julie
Director Rufus Norris
National Theatre
Adam Cork and Alecky Blythe's verbatim musical, directed by Rufus Norris, focuses on the Ipswich community immediately affected by the 2006 serial killing. A cast of 11 play over 60 roles, all of which involve recreating verbal recordings of interviews with local residents.

Kate played various roles, including Julie, a resident of London Road and was nominated for Best Actress in a Musical at the 2012 Olivier Awards.


London Road was shortlisted for Best New Musical at the Evening Standard Theatre Awards 2011.
Media
Reviews
One abiding impression is made by Kate Fleetwood as Julie. Patrick Marmion
Daily Mail
One of the most exciting experimental pieces the National has ever presented. Michael Coveney
The Independent
There’s a real surprise in seeing Kate Fleetwood sing as well as anyone. Michael Coveney
Whatsonstage.com 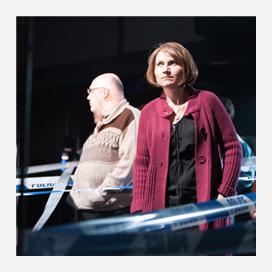