In this tautly woven tour de force, the paths of four very different women intersect, briefly but significantly, in ways that will change each of them forever. MacKenzie Bezos’s Traps is a propulsive exploration of the snares we build for ourselves, and of how life’s trials and reversals can lead to startling freedoms.

Dana is a beautiful young security guard trained in special ops can disarm a bomb or suture a wound but is terrified of committing to the man she loves. Lynn is a fiercely independent older woman living alone in Nevada and running a ranch for rescued dogs. Jessica is a reclusive movie star and mother of two whose father keeps selling her out to the paparazzi. Vivian is a seventeen-year-old prostitute who will do anything to protect her twin babies. Bezos brings deep intelligence and rich texture to her portraits of four women whose fates, though only tangentially connected, are linked in miraculous ways.

With infallible comic timing and enormous emotional generosity, Bezos mines the interior lives of her heroines: their fears, their longings, and above all the remarkable reservoirs of inner strength they bring to their struggles. Instantly engrossing, powerfully moving, and impossible to put down, Bezos’s page-turning novel reminds us that sometimes our greatest gifts may come to us disguised as our greatest obstacles.
Rights

Italian
World
Casa Editrice Nord Srl.
Media
Reviews
Her characters are beautifully delineated and arrestingly original. There is a sparkling, chiseled quality to her writing that puts me in mind of a master sculptor who commands the most disciplined craftsmanship in pursuit of passionate artistic ends. Geraldine Brooks

Traps is a page turner, a satisfying read. I didn’t want it to end. Abraham Verghese, author of Cutting for Stone
Full Review
Taut but nuanced, a character-driven thriller that is both suspenseful and intelligent.
Vogue
Bezos writes spare, present-tense prose that lends her writing an urgency as four women slip in and out of psychic and emotional peril.
The New York Times Book Review Full Review 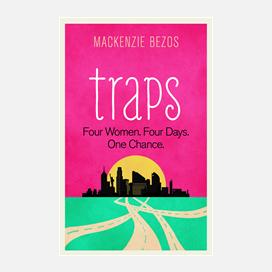