Canada → McClelland & Stewart Inc (Ed. Ellen Seligman)
US → Nan A. Talese (Ed. Nan Talese)
UK → Bloomsbury Publishing (Ed. Alexandra Pringle)
MaddAddam debuted on the Sunday Times hardcover bestseller list at number eight and on the New York Times bestseller list at number eight. It has been selected as a "Best Book of the Year" by Publishers Weekly and is one of Amazon's Top 100 Books of 2013.

Bringing together characters from Oryx and Crake and The Year of Flood, MaddAddam is the thrilling and provocative conclusion to Margaret Atwood’s speculative trilogy.

Months after the Waterless Flood pandemic has wiped out most of humanity, Toby and Ren have rescued their friend Amanda from the vicious Painballers. They return to the MaddAddamite cob house, which is fortified against man and giant Pigoon alike. Accompanying them – to their alarm – are the Crakers, the gentle, blue-skinned species bioengineered by the brilliant but deceased Crake. While their reluctant prophet, Jimmy – Crake’s one-time friend – recovers from a debilitating fever, it’s left to Toby to dole out the Craker mythology, with Crake as creator. She must also deal with cultural misunderstandings, terrible coffee, and her own jealousy over Zeb, her long-time romantic interest.

Meanwhile, Zeb searches for Adam One, founder of the God’s Gardeners, the pacifist green religion from which Zeb seceded years ago to lead the MaddAddamites in active resistance against the destructive CorpSeCorps. As Toby learns, Adam and Zeb have roots that go back to their twisted origins. Under threat of an imminent Painballer attack, the MaddAddamites must fight back with the aid of their new-found allies, some of which have four trotters.

Combining adventure, humor, romance, and the bizarre imagination that marked both Oryx and Crake and The Year of the Flood, Atwood’s brilliant dystopian trilogy comes to a satisfying conclusion with this final volume.
Rights

It's easy to appreciate the grand array of Margaret Atwood's works ...in all their power and grace and variety. When I think of it, and put it together with her writerly gifts and achievements, it takes my breath away. Alice Munro

Atwood is a poet. Scarcely a sentence of her quick, dry yet avid prose fails to do useful work. John Updike

One of the most important writers in English today. Germaine Greer 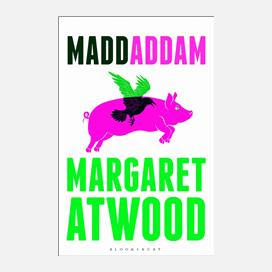