The Year of The Flood

UK → Bloomsbury Publishing
Canada → McClelland & Stewart Inc
US → Nan A. Talese
Margaret Atwood’s eagerly anticipated new novel is a testament to her remarkable literary mastery and imaginative power. Though set in the undefined near future, the novel reflects a world we very much recognise and poignantly reminds us of our own enduring humanity.

The times and species have been changing at a rapid rate, and the social compact is wearing as thin as environmental stability. Adam One, the kindly leader of the God’s Gardeners – a religion devoted to the melding of science and religion, as well as the preservation of all plant and animal life – has long predicted a natural disaster that will alter Earth as we know it. Now it has occurred, obliterating most human life. Two women have survived: Ren, a young trapeze dancer locked away in the high-end sex club where she works, and Toby, a God’s Gardener who barricades herself inside a luxurious spa where many of the treatments are edible.

Have others survived? Ren’s bio-artist friend Amanda? Zeb, her eco-fighter stepfather? Her onetime lover, Jimmy? Or the murderous Painballers? Not to mention the CorpSeCorps, the shadowy, corrupt policing force of the ruling powers…

As Adam One and his followers make their way through a changed world, Ren and Toby will each find their way out, leading to the novel’s unexpected and affecting conclusion.

By turns dark, tender, violent, thoughtful, and uneasily hilarious, The Year of the Flood is Atwood at her most brilliant and inventive.

The third novel in the Oryx and Crake trilogy, Maddaddam will be delivered in Winter 2012.
Rights 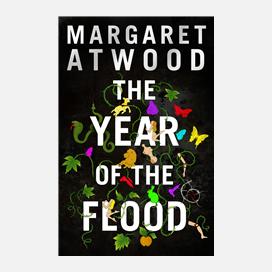