The Handmaid's Tale is a novel of such power that the reader will be unable to forget its images and its forecast. Set in the near future, it describes life in what was once the United States and is now called the Republic of Gilead, a monotheocracy that has reacted to social unrest and a sharply declining birthrate by reverting to, and going beyond, the repressive intolerance of the original Puritans. The regime takes the Book of Genesis absolutely at its word, with bizarre consequences for the women and men in its population.

The story is told through the eyes of Offred, one of the unfortunate Handmaids under the new social order. In condensed but eloquent prose, by turns cool-eyed, tender, despairing, passionate, and wry, she reveals to us the dark corners behind the establishment's calm facade, as certain tendencies now in existence are carried to their logical conclusions.

Sophie Baker manages the translation rights for The Handmaid's Tale

The images of brilliant emptiness are one of the most striking aspects of this novel about totalitarian blindness...the effect is chilling. Sunday Times

A taut thriller, a psychological study, a play on words. . . . A rich and complex book

This visionary novel.... can be read as a companion volume to Orwell's 1984 - its verso, in fact... It evokes the same kind of horror even as its mordant wit makes you smile

The most poetically satisfying and intense of all Atwood's novels

It is an imaginative accomplishment of a high order

Imaginative, even audacious, and conveys a chilling sense of fear and menace

The most chilling cautionary novel of the century

A sly and beautifully crafted story about the fate of an ordinary woman caught off guard by extraordinary events... A compelling fable of our time 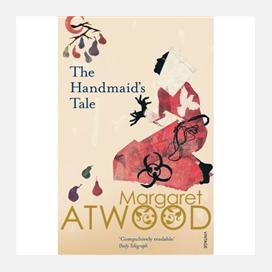