Crap at the Environment

What the environmental movement has been waiting for is a plane-frequenting, blissfully ignorant comedian with no green credibility whatsoever to tackle one of the most important issues of our time. When non-expert Mark Watson announced his intention to spend the year becoming less Crap At The Environment, within 24 hours, 500 mates and fans had joined him.

He lived for (almost) a week without plastic. He ransacked libraries in order to read frightening books on climate change. He lured audiences outside to plant trees, confronted his morbid fear of bike-riding, even started eating vegetables. And a man who began 2007 as a blight on the planet ended up coming to the attention of the most famous almost-president in the world, Al Gore . . .

Katie McGowan manages the translation rights for Crap at the Environment 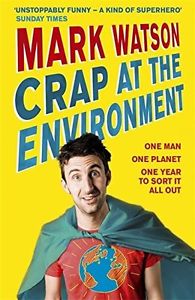