Embracing the Suck in a Savage Little War

When Lieutenant Matt Gallagher began his blog with the aim of keeping his family and friends apprised of his experiences, he didn’t anticipate that it would resonate far beyond his intended audience. His subjects ranged from mission details to immortality, grim stories about Bon Jovi cassettes mistaken for IEDs, and the daily experiences of the Gravediggers—the code name for members of Gallagher’s platoon. When the blog was shut down in June 2008 by the U.S. Army, there were more than twenty-five congressional inquiries regarding the matter as well as reports through the military grapevine that many high-ranking officials and officers at the Pentagon were disappointed that the blog had been ordered closed.

Based on Gallagher’s extraordinarily popular blog, Kaboom is “at turns hilarious, maddening, and terrifying,” providing “raw and insightful snapshots of a conflict many Americans have lost interest in” (The Washington Post). Like Anthony Swofford’s Jarhead, Gallagher’s Kaboom resonates with stoic detachment and timeless insight into a war that we are still trying to understand.

As funny as it is harrowing.

An oddly fascinating account of the high points (and low points) of Gallagher’s 15-month deployment…Kaboom will generate strong responses from readers.

A canny, moving commentary on the power of war to transform soldiers and civilians.

Mr. Gallagher is too modest, and too ironic, to tout his own accomplishments, so I'll do it for him: He is a classic representative of the U.S. military, a force that imposed its will, both physical and moral, to shatter al Qaeda in Iraq and quash the Shiite-Sunni civil war and that is now withdrawing with honor, leaving Iraq a much better place than under Saddam Hussein.

Kaboom is nothing short of purely honest, unabashedly descriptive and unexpectedly humorous.

[Gallagher’s] exceptional narrative technique makes the soldier in-group cant both believable and coherent; his relentless pursuit of sanity in the midst of a chaotic storm of IEDs, policy changes, sheiks, civilians, and baffling missions makes this blog-based memoir an exciting read reminiscent of Anthony Swofford’s Jarhead.

[Gallagher] proves himself a gifted writer in this boots-on-the-ground report, with some of his prose echoing the scattershot riffs of Dylan without the guitar

Kaboom is funny and profound, urbane and vulgar, witty and worthwhile

It is well worth reading.

A candid look at counterinsurgency warfare

A memoir by turns harrowing, hilarious and absurd.

Evocative prose, convincing dialogue, and, especially, telling vignettes of life as an American soldier in Iraq.

Beautifully written, literary in its approach, and looks to be a good companion to [Rage Company’s] more Spartan, unadorned take on the business end of surge operations and counterinsurgency.

[Gallagher's] love of language, acquired as an avid reader, and his elastic voice as a writer — his ability to move effortlessly between the earnest and the irreverent, the thoughtful and the comic. 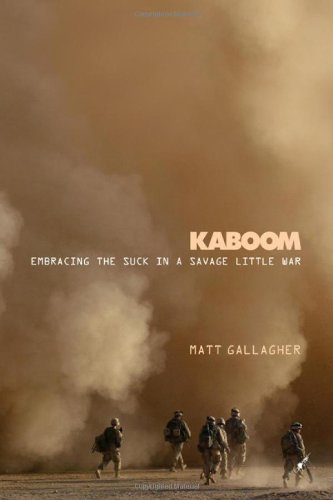