In Season 3, Durham County focuses on a task force that covers crimes along the 401 highway corridor. Mike Sweeney, now the Superintendent of the Durham police precinct, is on this force, which, when the episode opens, is investigating the murder of two young drug runners. Mike wonders whether these deaths are warnings to other runners or the beginnings of a gang war.Ivan Sujic (Michael Nardone), partners with Mike on the task-force investigating the drug-trafficking murders. The friendship between the two men, a friendship that grows and deepens, also becomes for Mike, a murder investigation. Mike suspects that Ivan’s troubled brother-in-law, Miro, may have something to do with Katya’s disappearance and that Ivan may know something about it. 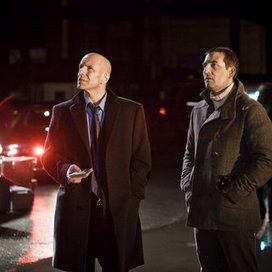