In seventeen intimate and incisive essays, poet Molly McCully Brown explores living within and beyond the limits of a body — in her case, one shaped since birth by Cerebral Palsy, a permanent and often painful movement disorder. In spite of — indeed, in response to — physical constraints, Brown leads a peripatetic life: the essays comprise a vivid travelogue set throughout the United States and Europe, ranging from the rural American South of her childhood to the cobbled streets of Bologna, Italy.

Moving between these locales and others, Brown constellates the subjects that define her inside and out — a disabled and conspicuous body, a religious conversion, a missing twin, a life in poetry. As she does, she depicts vividly for us not only her own life but a striking array of sites and topics, among them Mary Shelley’s Frankenstein and the world’s oldest anatomical theater, the American Eugenics movement and Jerry Falwell’s Liberty University.

The audio rights are handled by Anna Stein.

These remarkable essays invite us to look long and hard at our own interior landscapes, and to negotiate exterior ones with as much grace and gratitude as we can muster.

In her first collection of prose, Brown, a poet and writing instructor at Kenyon College, eloquently, often wittily describes a mostly wheelchair-bound life lived with pain and the places, emotional and physical, to which she has traveled [...] Brown is a writer to watch.

Places I've Taken My Body draws us closer to the poetry that sings beneath the everyday, revealing in its beautifully structured essays a method of 'attending to the world.' Those of us who wish to discover the divine in places outside the church sanctuary, outside the narrow confines of the body, will find here a map Brown has generously drawn for us. This is a work of great humanity.

Molly McCully Brown is a barometer, reading the weather of her own body. Her writing is sensitive, intelligent, and above all, clear-eyed and curious about her own experience as a writer, a traveler, and a disabled person. This is an important and beautiful rethinking of how bodies move through the world

I want to press this book into the hands of everyone I know. Writing from the locus of her own constantly changing, often intractable body, Molly McCully Brown captures the fullness of the human experience — desire, loss, flesh, faith, poetry, place, memory — with lyric compression and expansive grace. Reading these exquisite essays made me want to get out and do something with my own body — kneel at an altar and recite the Hail Mary, stub out a cigarette in Bologna, stand on a hilltop and shout expletives at the Trump administration. Which is to say, these are urgent, compelling essays that remind us how to be fully alive inside our own bodies, wherever we take them. 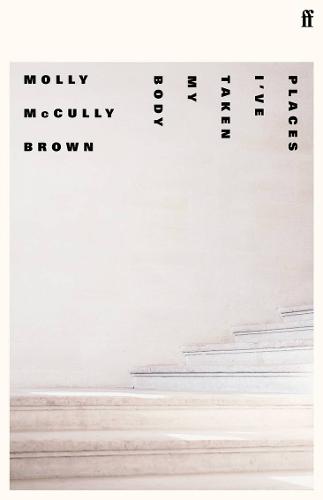