Nothing in the sometimes hazy history of Japanese literature prepares us for the stark, tension-filled, plot-driven realism of Natsuo Kirino's award-winning mystery Out, a work that took the Japanese literary scene by storm and continues to haunt the popular consciousness as a recently released major motion picture.

Kirino's novel tells a story of random violence in the staid Tokyo suburbs,as a young mother who works a night shift making boxed lunches brutally strangles her dead-beat husband and then seeks the help of her co-workers to dispose of the body and cover up her crime. The ringleader of this cover-up, Masako Karori, emerges as the emotional heart of Out and as one of the shrewdest, most clear-eyed creations in recent fiction. Masako's own search for a way Out of the straitjacket of a dead-end life leads her, too, to take drastic action.

The complex yet riveting narrative seamlessly combines a convincing glimpse into the grimy world of Japan's yakuza with a brilliant portrayal of the psychology of a violent crime and the ensuing game of cat-and-mouse between seasoned detectives and a group of determined but inexperienced criminals. Kirino has mastered a Thelma and Louise kind of graveyard humor that illuminates her stunning evocation of the pressures and prejudices that drive women to extreme deeds and the friendship that blosters them in the aftermath.

Out shows its author to be Japan's finest mystery writer as well as one of the most astute observers of contemporary society, revealing, in the course of its gripping pages, the fears, hopes, and obsessions that drive a complex country.
Rights

Daisy Meyrick manages the translation rights for Out 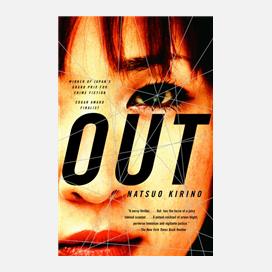