World → Shuei Sha Publishing Co
US → Knopf
UK → Vintage
A stunning new work of the feminist noir that Natsuo Kirino defined and made her own in her novels Out and Grotesque.

In a crowded residential suburb on the outskirts of Tokyo, four teenage girls indifferently wade their way through a hot, smoggy summer and endless “cram school” sessions meant to ensure entry into good colleges. There’s Toshi, the dependable one; Terauchi, the great student; Yuzan, the sad one, grieving over the death of her mother and trying to hide her sexual orientation from her friends; and Kirarin, the sweet one, whose late nights and reckless behavior remain a secret from those around her. When Toshi’s next-door neighbor is found brutally murdered, the girls suspect the killer is the neighbor’s son, a high school boy they nickname Worm. But when he flees, taking Toshi’s bike and cell phone with him, the four girls get caught up in a tempest of dangers they never could have even imagined that rises from within them as well as from the world around them.

Psychologically intricate and astute, dark and unflinching, Real World is a searing, eye-opening portrait of teenage life in Japan unlike any we have seen before.
Rights 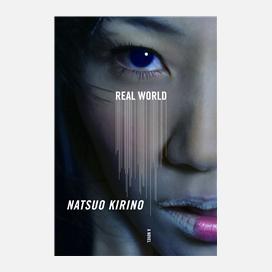