Constellations premiered at The Royal Court in January 2012 and transferred to the West End in November 2012, where it ran until 5 January 2013, with Rafe Spall and Sally Hawkins reprising the roles of Roland and Marianne.

Claire Alfree
Metro Full Review
The phrase "emotionally satisfying" is rarely seen alongside that of "experimental drama" - which makes Nick Payne's arresting, intelligent new play "Constellations" all the more exciting. David Benedict
Variety
I know it’s only January, but if I see a more ingenious, touching and intellectually searching play than Constellations this year, I will count myself very lucky. ***** Charles Spencer
The Daily Telegraph

Spry, funny and ultimately very moving... a touchingly original study of a relationship and a meditation on that all too familiar refrain: “if only”

Nick Payne has thought many things through before putting them into deceptively simple form... haunting

Aleks Sierz
The Stage
An absolute delight, a little gem of a play... touching and beautiful Michael Coveney
What's On Stage
Not since Mike Bartlett's Cock, so to speak, have I been so exhilarated by a new play... extraordinary Paul Taylor
The Independent
Payne is undoubtedly one of the brightest sparks in our playwriting landscape Fiona Mountford
London Evening Standard

Subtle... one of Payne’s most moving devices – a deft exploration of the life force and its precariousness

Carole Woddis
The Arts Desk
Emotionally supple and engaging throughout Matt Trueman
Carousel of Fantasies
the nearest I’ve come across in ages to a play that feels heaven-sent. Matt Wolf
The New York Times

Wondrously supple... The trick the playwright pulls off is to bring a feather-light touch to weighty themes *****

Some plays are worth defying claustrophobia for...  “Constellations” gets into your head and under your skin with an immediacy that sometimes tickles and often hurts.

Ben Brantley
New York Times
I do know the real thing when I see it. And Nick Payne, a playwright previously unknown to me, is at the beginning of a great career. John Lahr
The New Yorker

Andrzej Lukowski
Time Out
Nick Payne’s short, scintillating two-hander... is a bit of a beauty Dominic Maxwell
The Times Full Review
For all its teasing razzle-dazzle, though, it is the human warmth of the writing and acting that ensures the play never slides into tricksiness. Lyn Gardner
The Guardian
Nick Payne is a young playwright of rare virtuosity, and Constellations is his most significant achievement to date...The play lasts a little over an hour, but manages to dazzle, delight and dismay. Truly stellar. Henry Hitchings
The Evenings Standard
a bit of a beauty. Dominic Maxwell
The Times
It’s like a map of the entire unimaginable vista of humanity with a little arrow telling us “You are here”. **** Ian Shuttleworth
The Financial Times 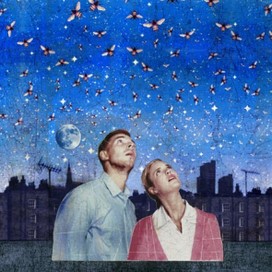