One Day When We Were Young

Director Clare Lizzimore Starring
Sheffield Theatres/Paines Plough
Examining the impact of the Second World War on two ordinary lives and a love that spans more than sixty years, One Day When We Were Young premiered at the Crucible Studio, Sheffield, in October 2011 in a Paines Plough production.
I am scared, that once this war is over, and I am sent home, that you won't be here. That you will have left.
Leonard and Violet, young, restless and in love, spend their first night together knowing it may also be their last. It's 1942 and, in a hotel room in Bath, they dream of their future while preparing for Leonard's departure to the war. But the bombs begin to fall and their world will never be the same again.

In the year 2002, the couple look back at what might have been.

Media
Reviews
a gripping love story, as well as a potted history of social change in Britain over a 60-year period Lyn Gardner
The Guardian

Payne hits his mark and then stays there ****

Fiona Mountford
Evening Standard
surprising and acute Dominic Cavendish
The Times Full Review
One Day When We Were Young, the first and best, is a brilliantly observed, often funny depiction of a couple over 60 years that also quietly breaks your heart Jonathan Lovett
The Stage 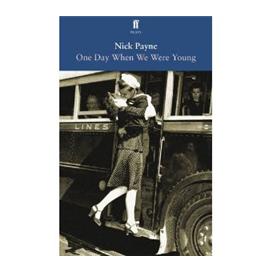