Winner of the Prix Femina in France 2013

The distinguished modern American master and Pulitzer-Prize winning author makes his Ecco debut with this haunting and elemental novel about a young man forced by catastrophic circumstance to reconcile himself to a world that has been rendered unrecognizable.

“First, I’ll tell about the robbery our parents committed. Then the murders, which happened later. “

When fifteen-year-old Dell Parsons’ parents rob a bank, his sense of a happy, knowable life is forever shattered. In an instant, this private cataclysm drives his life across a threshold that can never be uncrossed.

His parents’ arrest and imprisonment mean a threatening and uncertain future for Dell and his twin sister, Berner. Willful and burning with resentment, Berner flees their home in Montana, abandoning her brother and her life. But Del is not completely alone. A family friend intervenes, spiriting him across the Canadian border, in hopes of delivering him to a better life. There, afloat on the prairie of Saskatchewan, Dell is taken in by Arthur Remlinger, an enigmatic and charismatic American, whose suave reserve masks a dark and violent nature.

Undone by the calamity of his parents’ robbery and arrest, Del struggles under the vast prairie sky to remake himself and define the adults he thought he knew and loved. But his search for grace and peace only moves him nearer a harrowing and murderous collision with Remlinger, an elemental force of darkness.

A true masterwork of haunting and spectacular vision from one of our greatest writers, Canada is a profound novel of boundaries traversed, innocence lost and reconciled, and the mysterious and consoling bonds of family. Told in spare elegant prose, resonant and luminous, it is destined to become a classic.

One of his generation's most eloquent voices.

Michiko Kakutani
The New York Times
One of the finest curators of the great American living museum.
Washington Post Book World
North of the Border: Richard Ford
Richard Ford is a great American writer. Ruby Cutolo
Publishers Weekly Full Review
Waking Up to the World's Chaotic Heart
“[R]obust and powerful… [Canada] goes deeper than the spectacle of trauma. Mr. Ford is able to tap into something momentous and elemental about the profound moral chaos behind the actions of seemingly responsible people… the writing is clean and stripped-down… By depicting tragedies without deep roots in reason or purpose, Mr. Ford has dramatized the frightening discovery of the world's anarchic heart. Sam Sacks
The Wall Street Journal Full Review
One considers this book long after it is finished, which may be one of the best standards for literature, or, indeed, a life lived. Rick Bass
The Boston Globe Full Review
Richard Ford in welcome return with Canada
Canada is Ford's first appearance on the new-book shelf in six years. In every way, it was worth the wait.
The St. Louis Post-Dispatch Full Review
Spare and beautiful. Harvey Freedenberg
Star Tribune Full Review
Canada is a superlatively good book, richly imagined and beautifully fashioned...one is tempted to acclaim it a masterpiece. The final encounter at the close of the book... is one of the most tenderly drawn scenes in modern literature, and could only have been written by a writer of Richard Ford's empathy, insight and technical mastery. John Banville
The Guardian Full Review
Ford manages to resolve the novel in a fashion that is somehow both heartbreaking and heartening, and with Canada as a whole he reasserts his already very secure position as one of America’s finest and truest writers.
The Philadelphia Inquirer Full Review
Richard Ford&rsquo;s &ldquo;Canada&rdquo; Is His Best Novel In Years
Richard Ford returns with one of his most powerful novels yet. Canada is Richard Ford’s best book since Independence Day. Michael Gorra
The Daily Beast Full Review
Told in Ford's exquisitely detailed, unhurried prose…Ford is interested here in the ways snap decisions can bend life in unexpected directions — ''crossing a line and never being able to come back.'' What makes people commit crimes? What are the real consequences? And how do you keep going after everything around you collapses? Canada's characters grapple with this last question in very different ways, and the answers they come up with define the rest of their lives, along with this quietly thoughtful book. Rob Brunner
Entertainment Weekly Full Review
Richard Ford is one of the great American post-war writers.
Foyles Full Review
Ford’s genius at capturing human frailty and its pitiful disguises burns through this novel. Lucy Daniel
the Telegraph
A surprisingly different kind of great Richard Ford novel... and one that casts its spell very slowly and with a steady cumulative power.

Sean O'Hagan
the Observer
Canada is a painful, unique novel from the pinnacle of which all observed life seems to be laid out for us. Phillip Hensher
the Independent
Ford is possessed of a writer’s greatest gifts...meticulousness of style, along with a finely tuned ear and a steel-trap memory. A hearty meal of a novel from Richard Ford...represents a warm moment in American letters.
Lorrie Moore
the New Yorker
Points North
Canada is a masterwork by one of our finest writers working at the top of his form. Andre Dubus III
The New York Times Book Review Full Review 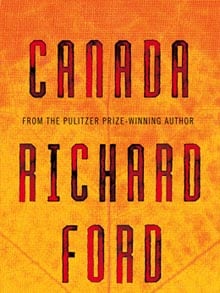