Green Wing was created by the team behind the award-winning Smack The Pony, the popular Channel 4 sketch show which ran between 1999 and 2003. Writers Victoria Pile, Robert Harley, James Henry, Stuart Kenworthy, Oriane Messina, Fay Rusling, Richard Preddy and Gary Howe were the brains behind this genre-defying comedy which proves that filming in a hospital doesn't have to involve any reference to medical issues.

Green Wing won a BAFTA award in 2005, as well as receiving nominations for several other awards. In 2007 Robert was personally BAFTA-nominated along with the producer/directors for the second series.

Media
Reviews
Like a homegrown ER on laughing gas, this show will be sorely missed. Matt Baylis
Daily Express & Daily Star
It was like a Richard Curtis romcom, albeit one force-fed magic mushrooms. Ian Johns
The Times
It deserves an exalted place in TV comedy history. It's the funniest thing on telly by a mile. Sam Wollaston
The Guardian 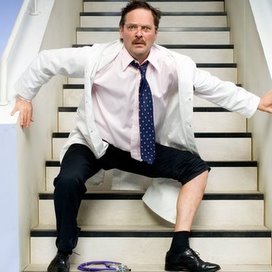