View PDF
theatre
Role Jonathan
Director Lisa Spirling
Soho Theatre
Lou Ramsden’s Hundreds and Thousands is a four-hander which follows Lorna as she becomes swiftly engaged to Allan, prompted by the pressure of her biological clock ticking. Her initial happiness soon takes a dark turn, however, as she discovers a disturbing secret in Allan’s isolated farmhouse home. 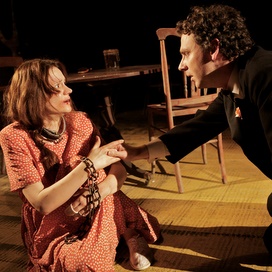