Roommates - a flat share sitcom about twenty something professionals - was the first script Robin French and Kieron Quirke wrote as professional writers.  It was picked up and developed by Talkback.

When ABC's cable comedy outlet, ABC Family, read the script they picked it up as their first live action scripted comedy series.

Robin and Kieron executive produced and wrote on the show in the US. 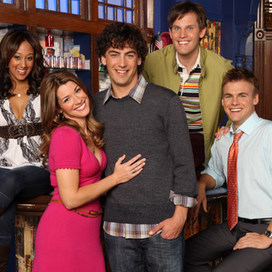