Trinity was a cult hit on ITV2 with a huge following across Twitter, Facebook and other social media and with viewing figures outstripping the digital slot average, including an opening well over a million viewers.

Media
Reviews
The characters are well drawn, the plot is ingenious, the sex is raunchy and the look is opulent Andrew Billen
The Times
absolutely addictive...I'm totally gripped and hooked Mark Ravenhill
Saturday Review
immense fun Liz Jensen
Saturday Review
Trinity is well produced, with some great performances and a mystery that leaves us wanting to know more. I'm already hooked Donna Wiffen
Broadcast
Thank God, then, for Trinity. Ash Atalla puts Footballers' Wives, Inspector Morse and Buffy into a pot, stirs, and out comes this - and what a romp it is. His first non-comedy, and yet I laughed out loud. The casting of Charles Dance is genius; I love the fact that the royal tart really is a royal. It is ridiculous, but knowingly so, and I am sure it will be a great hit. The creepy thriller undertones left me wanting more, and although I know it's not meant for me, I will be tuning in. Kelly Webb-Lamb
Broadcast
never a dull moment...Trinity is shaping up as an unholy treat Keith Watson
Metro
We're at a collegiate university, it's very, very silly, Porterhouse Blue meets There's Something About Mary, that kind of thing. It's early days I know, but I think it looks quite promising Sam Wollaston
The Guardian 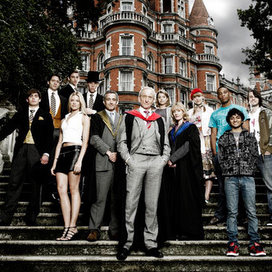