UK & Comm → Constable & Robinson (Ed. Victoria Highes-Williams)
Dotty, Lucy and Annabelle all turn up for work at Coventry’s department store Owen Owen at the same time as war is declared.

Dotty has never known a life outside of the orphanage where she grew up. Lucy is the sole carer of her little sister; she’s head of the home now that her brother has gone to war. So she seeks out a job at Owen Owen. Annabelle has led a life of privilege but everyone’s having to pinch the pennies at the moment. The well-off are no exception, much to Annabelle’s annoyance.

The three young women are brought together on their first day at Owen Owens. As the trials and devastating effects of war come to bear on the three women, their bond deepens. With disaster at every turn, they’re going to need each other…
Rights

Media
Reviews
A first-rate wartime saga of real warmth and charm, its strength lies in its persuasive and beautifully realised cast of characters, Goodwin's talent as a storyteller emerging through a richly engaging tale of friendship, love and loyalty.
Good Book Guide 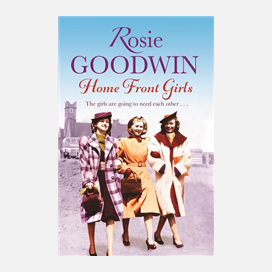