Life On Mars I

Producer Claire Parker Starring
Production Company Kudos Film and Television Ltd
Broadcaster BBC 1
SJ directed episodes 5 and 7 of the first series of the ground breaking police drama featuring John Simm as contemporary detective Sam Tyler, who having into a coma in 2005 after an accident finds himself transported back to 1970s where he apparently has to solve the mystery of this transportation in order to be restored to the present. Sam also has to navigate the culture shock of working in a 1970s police force.
Media 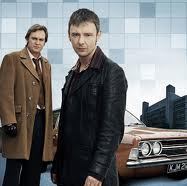