Adapted from Nigel Slater's autobiographical novel by screen writer Lee Hall (Billie Elliot), Toast was a highlight of the BBC1 schedule for Christmas 2010; to broadcast on 30th December 2010 at 9pm.

Starring Helena Bonham Carter as Nigel's stepmother and  Freddie Highmore as the fifteen year old Nigel with Ken Stott as Nigel's father and Victoria Hamilton as his mother: Toast is an evocation of all the tastes and smells that the food writer associated with his painful coming of age. A nostalgia trip through everything edible in 1960's Britain set to the songs of Dusty Springfield.

Media
Reviews
a touching tale ... The film is beautifully done – poignant and sad, but with lightness and humour. Sam Wollaston
The Guardian
a faultless evocation of 1960s Britain Simmy Richman
The Independent
You couldn't really get a more perfect Christmastime drama than BBC 1's Toast. Joyfully nostalgic, wonderfully foodie Alice-Azania Jarivs
The Independent
Toast, BBC1
Most of all, the direction ensured a narrative that was emotionally nourishing wtihout ever being over the top. Sarah Vine
The Times Full Review
Pick of the Day: 30th December 2010 9.00pm BBC1
What a triumph!...Toast never puts a foot wrong Alison Graham
Radio Times Full Review 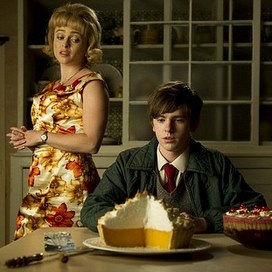