Tom's adaptation (with Chris Hurford) of Martin Amis' 1984 novel aired on BBC2 in May 2010 as part of the BBC's 1980's season. Money was directed by Jeremy Lovering and starred Nick Frost as John Self.

John Self, a successful director of commercials, is invited to New York by Fielding Goodney, a film producer, in order to shoot his first film.

Self is an archetypal hedonist and slob.  He is usually drunk, an avid consumer of pornography and prostitutes, he eats too much and, above all, spends too much, and is easily encouraged to do all this by Goodney. 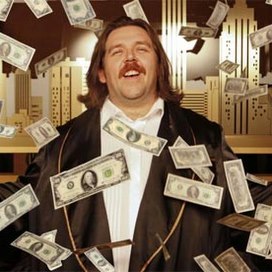