At the Edge of the Orchard

How far West do you have to go to escape a violent family legacy? What happens when you reach the Pacific and can’t go any farther?

The Goodenough family have left 19th-century New England to settle in the swamps of western Ohio, bringing with them branches of a favourite apple tree. But the orchard they plant sows the seeds of a long battle between James and Sadie Goodenough over what to do with the fruit, revealing irreconcilable differences in character. The escalation of this war resonates through their children; it forces the youngest, Robert Goodenough, to make an agonizing choice that haunts him as he runs away, grows up and moves ever further West. Only among the redwoods and sequoias of Goldrush-era California does he find solace and, eventually, answers.

Moving back and forth between Ohio and California, and anchored by two real-life tree men – legendary Johnny Appleseed and the English plant collector William Lobb –  At the Edge of the Orchard chronicles the implosion of a pioneer family and the shockwaves it sends through the generations and across America.

Chevalier has carved out a middle-point between writing literary fiction and its page-turning, commercial counterpart... this portrait of the tenderness of sibling love is in some ways Chevalier's greatest achievement.

This is a beautifully constructed and delivered tale, honestly brutal and forgiving of human imperfection.

The hardback is so beautifully designed that the whole reading experience is as rich a pleasure as the novel itself.

Rachel Hore
The Independent on Sunday

A densely packed tale of fruit, roots, family and hardship.

This novel of raw beauty touches themes Chevalier explored in her novel, The Last Runaway. It’s a richly rewarding read

The period is powerfully realised...so, too, is her characteristic trademark blending of fact and fiction by weaving in real characters.

Chevalier perfectly conjures the grandeur of the pristine Wild West Robert encounters, the bawdiness of the period, and the commanding needs of the everyday adventurers...She crafts for us an excellent experience.

Chevalier has created a patchwork of stories in which some pieces stand out more than others; together they form a picture of lives wrested from an unforgiving land, but with a promise of renewal.

Absolutely compelling, complex and bitter-sweet, a wonderfully satisfying read. The Goodenoughs are both living, breathing individuals and creatures of myth and I was bound up in their fortunes until the very last page.

A kind of arboreal love song ... an absorbing depiction of the harshness of pioneer life and the impossibility of escaping family ties.

A rollicking yarn of 19-century America.

The hardback is so beautifully designed that the whole reading experience is as rich a pleasure as the novel itself.

This novel of raw beauty touches themes Chevalier explored in her novel, The Last Runaway. It's a richly rewarding read.

A densely packed tale of fruit, roots, family, and hardship.

A wonderful book; rich, evocative, original. I loved it.

Chevalier has carved out a middle-point between writing literary fiction and its page-turning, commercial counterpart and this book will serve both those audiences.

With Chevalier’s excellent storytelling ability and gift for creating memorable characters, this novel paints a vivid picture of the hard and rough-hewn life of American pioneers on their Westward journey.

A new work by Tracy Chevalier is always a treat and At The Edge of the Orchard is no exception. This is the story of a pioneering family trying their best in difficult circumstances. Sometimes dark and brutal, sometimes moving, this powerful novel will transport you back to the 19th century in Ohio and California.

Chevalier is a master at foregrounding the small, dramatic stories of overlooked people from the past. 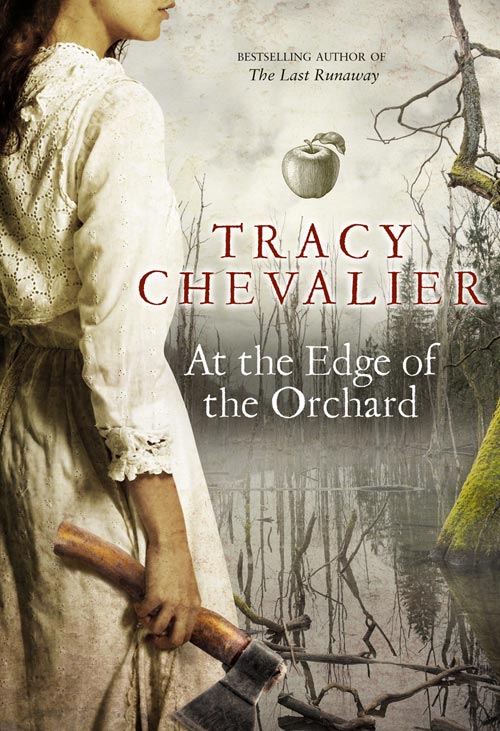