UK → HarperCollins
US → Dutton (Penguin Group USA)
January 1901, the day after Queen Victoria’s death: Two families visit neighboring graves in a fashionable London cemetery. One is decorated with a sentimental angel, the other an elaborate urn. The Waterhouses revere the late Queen and cling to Victorian traditions; the Colemans look forward to a more modern society. To their mutual distaste, the families are inextricably linked when their daughters become friends behind the tombstones. And worse, befriend the gravedigger’s son.

As the girls grow up and the new century finds its feet, as cars replace horses and electricity outshines gas lighting, Britain emerges from the shadows of oppressive Victorian values to a golden Edwardian summer. It is then that the beautiful, frustrated Mrs Coleman makes a bid for greater personal freedom, with disastrous consequences, and the lives of the Colemans and the Waterhouses are changed forever.

A poignant tale of two families brought reluctantly together, Falling Angels is an intimate story of childhood friendships, sexual awakening and human frailty. Yet its epic sweep takes in the changing of a nation, the fight for women’s suffrage and the questioning of steadfast beliefs.
Rights

Danish
World
Jentas AS
Dutch
World
Orlando Uitgevers
Italian
World
Neri Pozza Editore
Japanese
World
Bungeisha
Norwegian
World
Aschehoug & Co
Romanian
World
Editura Polirom
Russian
World
Eksmo Publishers
Serbian
World
Laguna
Slovene
World
Ucila International
Swedish
World
Jentas AS
Turkish
World
Bilge Kultur Sanat
Media
Reviews
Her portraiture is as intense and jewel-like as a chromolithograph... a highly accomplished work. Boston Globe
Full Review
Chevalier is a master of voices. Janice P. Nimura
New York Times Full Review
Chevalier's ringing prose is as radiantly efficient as well-tended silver. Gillian Flyn
Entertainment Weekly Full Review
A rich story that is true to the era without being a pastiche. Cleveland Plain Dealer
Full Review
Chevalier has a gift for deftly integrating masses of historical detail into her fiction. The Washington Post
Full Review
The author's grip on the reader is as powerful as in her first novel... It is almost impossible to break off reading this driving narrative. The Independent
Full Review
Chevalier does a good line in ghouls, with visits from the Coleman grandmother as much a treat for readers as it is a shuddering nightmare for her relatives. The Guardian
Full Review
Chevalier writes with sharpness and insight. The Sunday Times
Full Review
A well researched, vividly imagined and entirely credible tale. The Sunday Telegraph
Full Review
Chevalier handles this material beautifully... Writing about the past — especially this much written-about period — has its pitfalls, but Chevalier has triumphantly avoided them. The Times
Full Review
Marvellous... Chevalier catches a society on the brink of the modern age. Daily Mail
Full Review 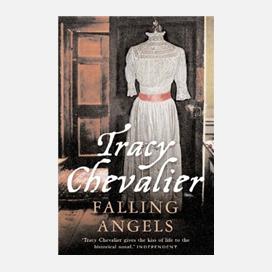