The Lady and the Unicorn

UK → HarperCollins
US → Plume
Two families, two cities, one rogue go-between, and a set of gorgeous tapestries, all in a late medieval setting.

Nicolas des Innocents, a handsome, lascivious artist, is summoned to the Paris home of Jean Le Viste, a nobleman who wants Nicolas to design a series of battle tapestries for his house. Jean’s wife, Geneviève, persuades Nicolas to talk her husband into a softer subject: the taming of a unicorn by a noblewoman. Nicolas shapes the tapestries with his own vision, dedicating five of the six to the senses and using the images of Geneviève and her daughter, Claude, with whom Nicolas is smitten, for two of the ladies in the tapestries.

Nicolas takes the finished designs to Brussels, where master weaver Georges de la Chapelle will make them. At first Nicolas is scornful of Georges, but gradually comes to respect him and his wife Christine, and to take an interest in his daughter Aliénor. Nicolas models two more of the ladies in the tapestries after Christine and Aliénor, but his heart lies with the unattainable Claude.
Rights 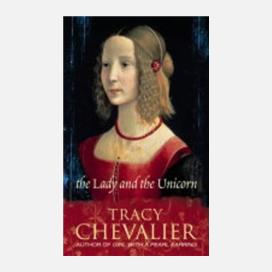