Miden/The Girl at the Door

Miden is a society built from the ground up. Commissions dedicated to fairness, equality, and mindful living have created an oasis following “the Crash,” and Miden, an island apart from the wreckage, has risen from the ashes of society as we know it. A seemingly aimless woman meets an attractive man while on vacation in Miden, and soon after she moves to the island to be with this man, a professor, and to start a new life.

Six months pregnant and just beginning to feel comfortable in her lover’s space, she feels as though she may have finally found meaning in and ownership of her life. Until the day the girl arrives. Slight and pretty, the girl defiantly discloses a drawn out and violent affair she’s had with her professor, the father of the woman’s child. In alternating shifts of perspective demarked “Her” and “Him” throughout the novel, the two reflect upon their own lives, each other, and their interloper, and are forced to confront their own paranoia, fetishes, and transgressions as the powers that be gather testimony and consider the case.

As their idyllic society grapples with the scandal, subjectivity and objectivity ebb, flow and cease to matter completely as sex, reputation, truth, and self-preservation upend their relationship. Provocative, problematic and unnerving, Miden constructs the bureaucracy of a scandal, and the thin line between lust and disgust. In an age in which blunt empowerment and fickle nuance take turns upon the stage, Miden is both prescient and timeless.

It’s a profoundly feminist tale about how to grapple with what we already know.

This uncompromising, fiercely intelligent novel confirms the moral usefulness of serious art: it reminds us that the world is more complicated than our righteous certainties; it forces us to acknowledge the abyss.

The absence of proper names - this cloudy desert of names - elevates the degree of dystopian originality of the book (...) together with the general atmosphere anchored to a delicate and yet poisonous effect of disorientation, in which the tragedies the impossibility of any definition - of how you can destroy and rebuild love - are brilliantly disturbing with the rhetoric power of Hamlet's ghosts.

The impeccable portrait of the dystopian Miden is a very welcome variation in the Italian scene.

Catching very much the zeitgeist, the book talks about harassment, consensus, populism and vigilantism, but also about what we feel when our actions are analyzed from outside and we become characters of someone else's narrative.

The writer creates a world – sensing its cracks – which is made of a strange and lucid emotionality, and she penetrates the readers as a scalpel to make them meditate on politics and sensitivity, an oxymoron you won’t forget easily.

Miden is an ambitious novel because doesn't offer any ideal morality but faces horizontally the issue of violence: how our life can be affected when we become aware that what we have done has a different meaning for someone else.

Raimo is clever in imagining the subversion of a libertarian Dream - eco-friendly, almost hippy - in a claustrophobic 'ethic" State, populated by a virtuous community which intends to punish any form of deviance: at the end, the real enemy of Miden is human nature itself, with its irreducible ambiguity.

As it happens in all the great novels, Miden has more than an access: there is the possibility of an interpretation in the gender studies frame, then there is the political question of an ethic State and moreover there are extremely philosophical questions which can be debated - all these things without ever getting away from the main story where we find a man accused of sexual abuse who should respond in front of his girlfriend and in front of the institutions.

An astonishing novel that examines moral anguish from original and captivating angles, full of quotable lines and startling insights into conscience and the urge to judge. The novel explores the limits of intimacy, physical and emotional, and is as gripping as anything I’ve read this year. Sexy, dangerous, modern - what’s not to love?

Raimo is... interested in complicating our ideas about what it might mean to expunge, or even attempt to expunge, the worst impulses and elements from society.

This is a clever story, deftly constructed, and its approach pushes the questions of intention and belief to their most extreme iteration, forcing us to grapple with the fact that, in cases of rape, we often rely on our views of the subjects to make a judgement.

A meditation on the sheer loneliness of contemporary society, Raimo’s novel is undoubtedly a story for our times.

Raimo’s tight and provocative novel, set in a vaguely Nordic utopia called Miden, avoids easy classification. Instead it uses the form of a sexual misconduct investigation, with expulsion from paradise as the punishment on the table, to explore larger questions about sex, power, and collective responsibility, outside of the usual context of a familiar legal system and cultural conventions.

Raimo’s prose is lean, sprinkled with dashes of the poetic... What makes The Girl at the Door so thorny is the way in which it dissolves into a hall of mirrors, offers itself to be weaponized by conflicting viewpoints.

[A] fanged, elliptical tale... The novel deals in shifting sentiments: between love, revulsion, and desire... A writer of wry and lucid prose, Raimo sculpts from these ambiguities a crystalline, powerful novel. 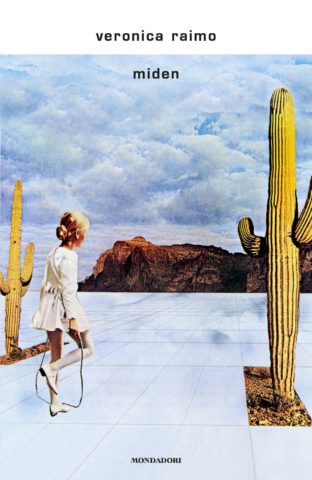