For Richer, For Poorer: A Love Affair With Poker

In September 2006, Victoria Coren won a million dollars on the European Poker Tour. In this, her long-awaited memoir, Coren tells the story of that victory, but also of a twenty-year obsession with the game. It is a journey which has taken Coren from a secret culture of illegal cash games to the high-stakes glamour of Las Vegas and Monte Carlo, and brought with it friendship, laughter and money, but also loneliness, heart-break and defeat. With disarming honesty, Victoria Coren lays all of this bare. For Richer, For Poorer also tells the story of the poker revolution. How did this cult card game, populated by a small community of colourful and eccentric players, move from the back streets to the mainstream in a few short years? It is a fascinating story from a trusted insider.
Rights

Jonny Geller manages the translation rights for For Richer, For Poorer: A Love Affair With Poker 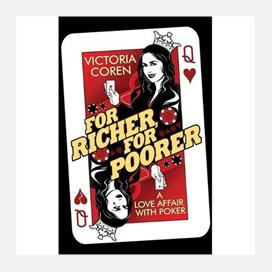