The Geek, the Greek and the Pimpernel

UK & Comm → Orchard Books
The Scarlet Pimpernel is back - but this time he's 14 and at school. Staleways School is dominated by a gang of thugs - Jaco's Bins they're called, because they're led by Jaco and their favourite pastime is sticking other kids, headfirst, into the dustbins. But now a new boy has arrived and he's going to turn the place upside down. His name is Percy Blake and he's not afraid of anyone. Percy soon finds a couple of allies in Michael Patroclus (the Greek) and Minou, a very bright new girl, who is nicknamed the Geek. A mystery develops in the school and the three friends find themselves trying to solve it - but there is one mystery Michael and Minou can't figure out - who is the elusive Pimpernel, who keeps making things happen but is never seen . . .
Media 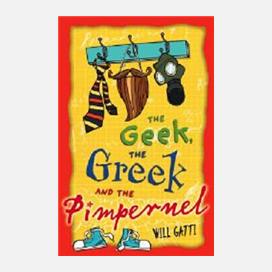